I live in rural Southwestern Ontario, Canada and late yesterday afternoon it started snowing in earnest. This morning I awoke to at least eighteen inches of new snow. Yes, eighteen! It looks beautiful from the window, but then I don’t have to clear it away. Enter hubby.

Last night the news anchor reported that a little further west from here 37 inches of new snow had fallen. It showed a tractor-trailer in the ditch. Many cars had been stranded. Snowmobiles were called in for rescue. One man was being treated for hypothermia after he spent more than seven hours in his car overnight. The roads were closed. I’m thinking all those people weren’t celebrating the beauty of the snow yesterday.

For several weeks my sister and I had planned to get together with our mum to write out our Christmas cards. They live about an hour away. I was going to meet them at my sister’s house. 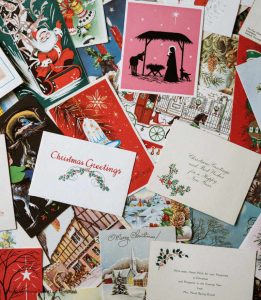 I bought yummy food for supper. My sister and mum were going to go to the local bakery to buy desserts – yes, plural. I had my Christmas cards and address books. I had address stickers and Christmas stickers and Christmas-coloured markers and my special pen. We would need Christmas CD’s – no problem there. I bought shortbread cookies and fruitcake. I mean, really, you absolutely need those if you’re going to do anything Christmassy. And did I mention “chocolate”. After the Christmas cards were done – or we were done with the cards, whichever came first – we were going to watch movies, Christmas movies. Mum and I would stay overnight and top this entry into the Christmas season with going to a Christmas bazaar Saturday morning. I was quite looking forward to it.

Late Friday afternoon I finished work and started gathering up everything I would need. As I passed the living room window I looked out and all I could see was snow! Snow coming straight down. No breeze. I couldn’t see across the road. Now, how was I going to get to my sister’s? I continued to pack. Surely the snow would stop soon. And, it did! About 30 minutes later I went out to clear the snow off the car – about six or eight inches. Half way through the job it started snowing again. I was standing in snow halfway up to my knees. The road was white. The driveway was… well, let’s just say “snow” is the operative word here. My hubby arrived home and declared he was glad I was still home and that I wasn’t crazy enough to venture out. Hmm, I think that’s a compliment!

Change of weather can sure change plans in a hurry.

My sister and mum still got together – they live ten minutes apart – and quickly came up with a Plan “B” for supper. Ate the desserts – yes, plural. Wrote out some cards. They did phone to find out how I was doing with my Christmas cards. I was supposed to be doing Christmas cards? Nah, I was dozing in my chair, while visions of thousands of glistening snowflakes danced in my head.