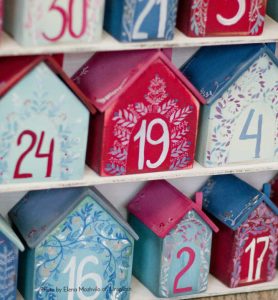 The little boy looked at his alarm clock. It was 9:00 am. He jumped out of bed and ran to the calendar, knowing full well what day it was. December 24th, the day before Christmas!

The little boy was so full of Christmas cheer that he threw on his coat and mittens and ran outside to share it with everyone else. He didn’t bother to tell his mom, as she was very sick and he didn’t want to wake her. The little boy skipped down the street and waited for someone to walk by so he could wish them a Merry Christmas.

The first person he saw was wearing a long, black coat and was walking with a cane. As the person got closer, the boy saw that it was a very grumpy looking old man with white, scraggly hair and a very large nose, which sat upon an unshaven, sour looking face. The boy began to second guess whether he should say anything to this man or not, but quickly realized that even grumpy old men must be somewhat cheerful on Christmas Eve. As the man approached him, the boy took a deep breath and gave him his very best “Merry Christmas.”

“Humbug,” the man said. The little boy was stunned. How could anyone be grumpy at Christmas? What does “humbug” mean anyway?

The next person he saw was a short, plump lady whose arms were loaded with presents. They were stacked in such a way so that they rose just above her head. The boy wondered how she saw where she was going. He decided that he would help. He ran up to the lady and said, “Excuse me, ma’am, would you like some help?” but he got no response. He figured she didn’t hear him, so he tugged on the corner of her coat to get her attention. All of a sudden the lady jumped and the presents fell out of her hands and scattered all over the sidewalk. When the boy finally saw her face, he saw that it was very round and rosy, and now very angry.

“You scared me half to death!” she scolded. “Now get out of here you little scamp!”

The boy wanted to explain, but 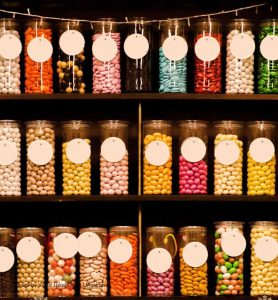 instead he ran away from the woman, down the street and into his favourite candy store. Working behind the counter was a much older boy. He figured he was about fourteen. The little boy decided he would try to spread what was left of his Christmas cheer. “Merry Christmas!” The boy behind the counter shrugged his shoulders and said, “I don’t celebrate Christmas.”

The little boy didn’t understand. “What about Santa Claus and the reindeer and all the presents and the elves in Santa’s workshop?”

“First of all,” the older boy explained, “Santa doesn’t exist. It’s all just a story for little kids like you so that your parents have to spend lots of money to get you presents.”

The little boy was crushed. Tears began to burst from his eyes, and for fear of the older boy seeing him cry, he ran from the store. He kept on running until he found some steps where he sat with his head in his lap and wept. He couldn’t believe there was no Santa. What was the point of having Christmas at all?

All of sudden, the boy felt a large, soft hand on his back. He looked up and saw a man sitting beside him. The boy was startled at first, but the man’s warm smile and soft, kind-looking eyes relaxed him.

“Why are you crying?” the man asked.

The boy was reluctant at first, but there was something about the man that made the boy want to tell him the whole story. And he did; from the old man with the cane, to the lady with the presents, to the awful truth about Santa. The boy sobbed through the entire story, and when he was done, the man said, “Let me tell you a story about a carpenter named Joseph and his wife Mary.”

The man proceeded to tell the boy about the birth of Jesus Christ and that it was the true reason they celebrated Christmas.

Once the boy finished crying, and began to realize what Christmas was really about, he decided it was time to go. He asked the man if he would like to walk him home and meet his mom. The man took the boy’s hand and they began to walk. When they got to his house, the boy’s mom was nowhere to be seen.

“Mom, I’m home”, the boy yelled. But there was no answer.

The boy guided the man to her room and knocked on the door. No answer. The boy told the man that his mom was very sick and that she might be sleeping. He very quietly opened the door and tiptoed inside. His mom was lying on the bed motionless with her eyes closed.

There was no response. This time the boy tapped her on the shoulder; perhaps she was in a deep sleep.

“Mom, wake up,” the boy said loudly as he poked her arm. Still there was no response. The boy began to cry. 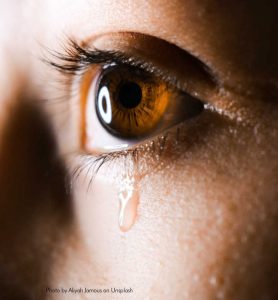 It was no use. The man took the boy in his arms in an attempt to calm him down, until the boy broke free, ran to the bed and wrapped his arms around his motionless mother.

The man very slowly started towards her. The boy saw him lay his hand upon her forehead and whisper something to someone he called “Father.” The boy wondered what the man was doing, when all of a sudden, he felt his mom move. Her eyes opened and she wrapped her arms around her son.

“Why are you crying?” she asked.

“I thought you were dead,” he replied.

“Now why on earth would you think that?”

The boy told his mom the entire story, and all about the man that had his hand on her forehead and began whispering.

She looked around the room. “What man?”